LEDs (light-emitting diodes) are a type of solid state lighting. They are comprised of small layers of semiconductor material. Applying electrical current through the LED semiconductor chips causes electrons to flow through a diode. As the electrons move from the positive to negative side of the diode, they slow down and orbit a lower energy level. The energy that is emitted as the electron moves to the lower energy level produces a photon of light. The small amount of heat that is given off during the conversion is typically released into a heat sink, making them cool to the touch.

LEDs are considered one of the most energy efficient sources of lighting for a variety of reasons: 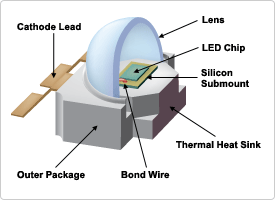 CFLs are more expensive than a comparable incandescent bulb, but have a life more than six times longer and can save up 75% of the initial lighting energy. They consist of a gas-filled tube and ballast.

Fluorescent tube and circline lamps are usually found in T12, T8, or T5 sizes based on their diameter, where a T12 is 12/8 inches in diameter. They are marketed at varying wattages, and they are sold in different U-shaped formats. These lamps work by generating an arc between two electrodes, and they are common lighting for large indoor areas.

High Intensity Discharge (HID) lamps are common in commercial and industrial lighting settings. There are four types of HID lamps: mercury vapor (common in street lamps), low pressure sodium (sometimes used in outdoor lighting), high pressure sodium (most outdoor lighting instances), and metal halide (large area lighting). All four types are electric arc discharge lamps that produce light by producing an arc between the two ends of the arc tube inside the lamp. HID lighting has the highest efficacy and longest service life of any type of lighting; however, HID lamps take up to 10 minutes to produce light, so they are ideal for areas where they will remain in operation for hours at a time.

Induction lighting is essentially fluorescent lighting without electrodes or filaments, the parts that frequently cause other bulbs to burn out quickly. Because of this, many induction lighting units have an extremely long life of up to 100,000 hours  more than 11 years in continuous 24/7 operation, and 25 years if operated 10 hours a day.

Despite its high initial cost, induction lighting has many superior characteristics, including the following:

The U.S. Department of Energys Waste Isolation Pilot Plant (WIPP) near Carlsbad, New Mexico, has demonstrated the long life of induction fluorescent bulbs in actual usage. WIPPs first induction lighting system was installed in 1998, replacing high-pressure sodium (HPS) lights. More than 10 years later, all but three of the original 36 induction units are still operating after more than 88,000 hours of continuous, 24/7 operation. Additional systems were installed in 2002 and succeeding years, both indoors and outside, with excellent results.

Although they may last 100,000 hours, after 60,000 to 100,000 hours of operation the initial lumen output of many of the induction lighting systems drops to 70%  the point where relamping is often recommended.

Like standard fluorescent bulbs, induction bulbs contain a small amount of mercury. Although it is in a solid state that makes it less harmful in case of breakage, it is nonetheless important to dispose of these bulbs responsibly at the end of their service life.

The following recommendations outline the most common ways to effectively save energy within various lighting systems. Some of these suggestions involve replacing the current lighting system with the most energy efficient bulbs, and installing occupancy sensors in low traffic areas to reduce lighting run-time.

Metal Halide lamps were once very popular for industrial lighting and are still used today. However, better quality light, especially over the life of the bulb, can be obtained with significant energy savings using LED sources. LED technology has advanced rapidly since 2010 and now offer cost effective solutions with better illumination characteristics. Many new fixtures are commercially available, but direct substitutions for existing HID fixtures are also available for a quick, inexpensive retrofit. Most often, these replacements offer service life two to four times that of metal halide lamps, with a higher coloring index and increased lumen maintenance. Normal simple payback periods for this recommendation range from two to four years, with shorter paybacks for installations where lights are on for extended periods of time (24x7).

LED tachnology has advanced rapidly and there are many options available for direct retrofit of T8 and T5 fluorescent tubes. The LED sources provide similar lumen output and better light quality with lower power input. These drop-in replacements are pin and form factor compatible and so can be easily installed into existing fixtures. The range of options available include LED tubes that can work with exisiting "instant on" fluorescent ballasts, as well as self-ballasted tubes that can be used by disconnecting the existing ballast. LED power requirements can be 40% to 50% of the power required for fluorescent, and so paybacks for new projects can be just a few years.

Incandescent light bulbs are usually found in offices, locker rooms, bathrooms, and other administrative areas. The main disadvantage of incandescent bulbs is that they only use approximately 10% of their energy to produce light; the rest is burned off as heat. By replacing incandescent bulbs with compact fluorescent bulbs, a reduction in initial lumens occurs. However, this loss in initial lumens is compensated by the CFLs' extended life, lower power consumption, and increased lumen maintenance (a decrease in the rate at which lamps lose their ability to produce light). Approximately 75% of the energy used by incandescent bulbs can be saved by switching to CFLs , and the relatively low implementation cost yields an attractive simple payback period for this replacement.

Occupancy sensors (also known as vacancy sensors) detect activity within a certain area and activate the lights as needed. Installing infrared or motion-detecting occupancy sensors will automatically extinguish the lights in unoccupied areas. These can be attached to a bank of lamps (limited by the wattage rating of the sensor switch) or on individual luminaires. Occupancy sensors should not be utilized with metal halide lamps due to the lamps' extended strike-up time, but are incredibly effective with fluorescent bulbs or LEDs. Offices, storerooms, and bathrooms are typical installation locations, but greater savings can be realized if they are installed in warehouses and tool cribs. Percentage energy savings will vary depending upon the amount of traffic in the considered area, but often lead to an attractive payback period of one year or less.

The following recommendations outline additional ways to save energy within various lighting systems. These recommendations are sometimes customary to specific facilities, but are still reliable sources for energy savings.

Installing daylighting panels in appropriate locations is the best way to take advantage of natural daylighting. In areas where daylight provides sufficient lighting levels, skylights may be installed, making artificial lighting unnecessary. Daylighting panels do require constant upkeep in order to keep them clean and allow adequate lighting to pass through, and may result in significant maintenance fees. Furthermore, initial implementation of daylighting panels can also be costly, due to high labor costs and possible required shut-down time during installation. It is often most efficient to preserve existing daylighting panels rather than installing new panels, unless capital expenses are accessible. Daylighting panels may also be used in conjunction with photosensors, as explained below.

Typically, metal halide, mercury vapor, and high pressure sodium bulbs are used in high bay ceiling areas. Although these types of lamps have high luminous efficacy, they are inefficient industrial lighting sources. Much of the light produced is absorbed in the ceiling cavities instead of being directed into the work area. By lowering the ballast of the lights and replacing the bulbs with fluorescent lighting as described in some of the recommendations above, it is possible to achieve the same lighting levels while decreasing energy consumption. Approximately 20 percent of the energy consumed by the lighting system can be saved by lowering the light fixtures and replacing the bulbs with fluorescent lighting.

Typically, most fluorescent lighting fixtures have specular reflectors which are reflective panels placed within the ballast chambers of a fixture that reflect light to surrounding areas. However, if they do not exist within the fixture, specular reflectors should be installed. The use of these reflectors reduces light loss and redirects light out of the fixture. The reflectors themselves do not save energy; however, installing them can increase lumen efficacy, which allows for delamping, or removing bulbs from fixtures. Generally, each specular reflective panel allows one bulb to be removed from a lighting fixture. The reduction in lighting levels by removing a bulb is compensated by the increase in lumens that the reflective panels provide. Therefore, there is no overall change in lumen levels. The reduction of bulbs in the existing fixture allows for electrical energy savings. Typically, 15 percent of the energy used by the lighting system can be saved by installing specular reflectors in panels that do not have them.

Turn off lights when not in use

Although it seems obvious, maintaining a regimented "lights-off" policy is perhaps the simplest way to reduce lighting consumption. Installing signs near light switches in storerooms or offices reminds employees to contribute to the overall energy savings.