Compressed air is often called the “fourth utility” since, behind electricity, gas, and water, it is one of the most essential supporting streams for manufacturing. Compressed air systems are divided into the supply side, consisting of the compressor(s) and associated cleanup equipment, and the demand side, consisting of the various points-of-use. The air distribution system (piping and storage) is in between, but is most often considered part of the supply side.

The following recommendations outline the common and most available ways to reduce energy consumption in compressed air systems. These suggestions include lowering operating pressure to the lowest level, implementing a reliable lead detection program, and utilizing proper controls to efficiently operate air compressors.

Most industrial air equipment is designed to operate with 80 psi (or lower) air pressure. However, many compressed air systems are configured to produce air at 100 psi (or higher). For compressors operating around 100 psi, every 2 psi reduction in compressor discharge pressure results in a 1% reduction in compressor power. Additionally, by lowering system pressure, unwanted air losses from the system, including leaks, are reduced by 0.6% to 1.0%. This means that by reducing compressor discharge pressure by 2 psi, a 1.6% to 2.0% reduction in compressor power can be expected. The only implementation costs are the time for employees or contractors to adjust the system operating pressure, resulting in a short and reliable payback for this recommendation.

Generally, any fitting in a system can leak air, wasting energy required to produce the compressed air. Leaks can account for approximately 20% or more of the compressor’s flow output in an unmaintained system. For a well-maintained system, leaks can account for 10% of the total air flow. Regular checks of the compressed air system components will detect leaks before they become severe enough to adversely impact electricity costs or cause mechanical problems. Repairing air leaks can reduce the energy used by the compressed air system by 10% to 20%, thereby reducing costs to operate the system. Material costs for leak detection programs are relatively inexpensive. However, maintaining an air leak detection program can be extensive since the program requires frequent upkeep in order to have a positive impact on energy savings.

Compressed air systems should only be used for appropriate manufacturing processes as per the original design. Refraining from using compressed air systems for menial uses, such as tank sparging, cleaning off work spaces, and drying areas, avoids wasting energy. By removing unnecessary end uses, the compressors will require less power to compress the air. Various electrical devices can often be utilized to perform the same functions as the compressed air. Various equipment costs lead to various implementation costs, but often attractive and achievable paybacks can be realized.

Compressor systems are often left on overnight or left running when manufacturing processes are not using them. Significant amounts of energy can be wasted when systems are left running to keep compressed air at a higher pressure even when it is not needed. Compressors should be turned off at the end of every night shift during weekdays and during weekends if a facility is not in operation. Decreasing the run time of the compressors will reduce the energy usage and costs associated with operating the compressed air system. The implementation cost for this recommendation can be low since it only requires plant personnel to manually turn off the compressors, or simply the programming of sequencing systems to turn off the system at specified times.

The following recommendations describe further ways to reduce energy consumption and realize cost savings in a compressed air system. They include using the appropriate size and type compressor, as well as installing adequate air dryers.

As explained above, compressors are not completely efficient and can generate a significant amount of waste heat. Compressor work is directly proportional to the intake air temperature. On average, outside air is cooler and denser than indoor air. Therefore, by ducting outside air to the intake of the air compressor, energy savings may be realized. If compressors are housed in conditioned areas, the space conditioning energy requirements can also be reduced. Approximately 5% energy savings in the compressed air system or space conditioning systems can be observed by using cooler intake air for the compressors.

Use a dedicated compressor

Air compressors intake air as it is, which almost always includes some humidity. By installing adequate dryers, most of the water content can be eliminated from the compressed air system, thereby keeping the system at its highest efficiency. Using efficient air dryers with appropriate capacity can yield potential cost savings, and a justifiable payback if implementation costs are reasonable. 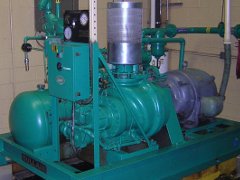